The origins of eggnog and the components (ingredients) of the concoction are still debated. Some say it was invented during the medieval times.  The “nog” part of the beverages name is said to have stemmed from the word noggin, a term that meant a small, wooden mug used to serve alcohol. It was also referred to as a Egg Flip, which was the practice of rapidly flipping the mixture between two pitchers to mix it.

In England eggnog was considered the trademark drink of the upper class. James Humes an author and historian writes that the average Londoner rarely saw a glass of milk.

It is also said that eggnog descended from a hot British drink called posset, which consisted of eggs, milk, with the addition of an ale (beer) or wine.

With the addition of alcohol, the eggnog was aged for several weeks, maybe even months. Yes raw eggs were used, but remember, booze or alcohol can both be a preservative and sterilizer. Very few bacteria, including salmonella, are not able to survive in the presence of alcohol, as has been proven in lab experiments at Rockefeller University.

Whatever the origins may be, a great beverage was invented 100’s of years ago, which has became a traditional beverage throughout Canada and the United States this time of year, that is starting in November and being available in the market through the first of January.

Let’s get to “Egg Flipping.” But before we can do that, let’s make some eggnog, and here is what you will need.

Separate the eggs, putting the yolks in one bowl and the whites in another. Cover the egg whites and refrigerate until needed.

Combine the yolks and the sugar in a medium mixing bowl. Whisk until the mixture is smooth and creamy.

Next, add the milk, cream, and liquor (if using) with the egg mixture and mix until combined.

Cover the bowl and chill in the refrigerator for at least an hour. The more liquor you add, the longer it will keep. If you are making non-alcoholic eggnog, store it in a sealed glass container. The beverage should be consumed within a day.

Adding the whipped egg whites will give the eggnog an extra-creamy texture. 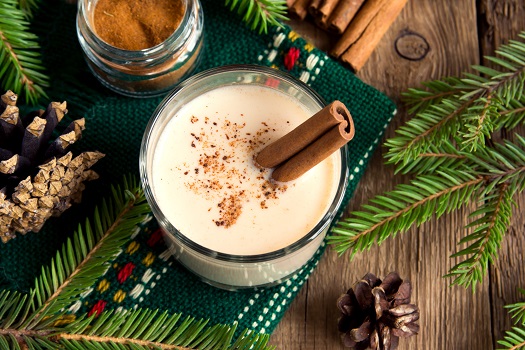 Serve in individual glasses topped with nutmeg, and a cinnamon stick.

You can also enjoy eggnog with coconut milk, by exchanging out the dairy milk.

One thought on “National Eggnog Day”