Chili peppers and other hot spices have been discovered and used by humans for thousands of years. The peoples of Mexico, Central America and South America have used chili peppers for more than 6,000 years, either used in culinary dishes, or in religious rites.

The chili peppers were discovered in the America’s in the 16th century, and taken to Europe and on into Africa and Asia.

The chili pepper has been altered over the years through selective breeding. The first known commercially bottled hot sauces in North America appeared in Massachusetts (USA) in 1807.

Frank’s Red Hot Sauce is a formulated sauce for use with the creation of Buffalo wings, and is the 12th best-selling hot sauce.

According to the Scoville scale, the Ghost pepper and Habanero pepper are used to make the hotter sauces with pure capsaicin extract and mustard oil added for extra heat.

The 2001 published book “The Handbook of Herbs and Spices,” is used as a standard reference for all manufacturers using herbs and spices, including the chili pepper in their products, and the book notes the Carolina Reaper as the world’s current hottest pepper.

The Carolina Reaper appears in the Guinness World Records since August 7, 2013 as the world’s current hottest pepper, with an average heat level of over 1,400,000.

One unchangeable and not widely known fact about the chili pepper…is they are a fruit. Yes most chili peppers can contain up to 170% of your daily need for vitamin-C.

But not to worry, the bell pepper is the sweeties pepper, and you need only 1 whole medium pepper or 3 mini-sweet peppers to receive your daily vitamin-C needs, without the heat.

Here’s a recipe we found by the Insane Chicken to celebrate this day, National Hot Sauce Day. make the pepper sauce if you dare in your own kitchen, or you can purchase it. The Zest Fest name the sauce a 2015 Golden Chili Winner (check out their website…featuring ZestFest 2016  – January 29-31 zestfest.net). 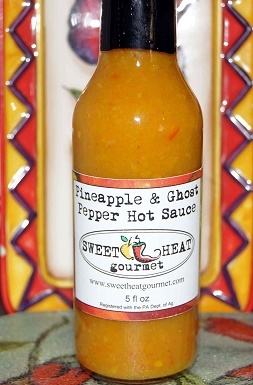 Place all but the vinegar in a food processor and pulse till pureed. Add to pot with vinegar and cook 15 minutes. If needed blend again for a smooth sauce.

Place in a hot water bath for 10 minutes.

Let age for at least 1 week.