A great addition to any soup you eat this Fall or Winter Season.

Cheese is one of the most enjoyed foods around the world and there are surely many types of it. And just as many ways to use cheese in your cooking and food preparations.

When you make toasted cheese bread, the cheese you use matters. Why?

When you melt cheese, the heat is kneading and stretching what is called protein casein bonds (number-one building block in cheese) rather than breaking them down to a liquid form.

The kneading and stretching of cheese when placed in heat, allows for moisture and fat to escape the casein.

After cheese has been added to heat, the end results is the feeling of gooeyness as you bit into that cheese topped hamburger or those tacos, grilled cheese sandwich, pasta, Mac and cheese and that slice of pizza.

You can have that same gooey feeling when bitting into a slice of Toasted Sourdough Garlic Cheese Bread.

The right cheese to use is a younger cheese, or less aged, as it well melt easier under heat.

The older the cheese or aged for a long period of time, the clumpier and harder to break down.

Choose a cheese that will melt into gooey goodness.

Here is a list of cheese choices for toasted cheese bread that will melt easily.

Poor melting cheeses include: mozzarella, feta, and provolone. Though you could use these, but they should be paired with a cheese that melts easily.

How Cheese Is Made

Cheese is made from the milk of cows, sheep, goats, and buffalo.

Good bacteria is used in the fermentation process to break down the fats and proteins into a larger molecules.

The flavor and texture of the cheese depends on the bacteria used.

Here is what you will need and what to do for a Toasted Sourdough Garlic Cheese Bread oven toasted cheese bread.

Try sourdough for a tangy flavor, or an airy bread like ciabatta if you like the cheese oozing through the holes.

Mince 2 gloves of garlic and place in small bowl with 2-3 tablespoons of olive oil. Mash garlic with a fork. Next, add a few shakes of Harissa seasoning and mix in.

Spread garlic-oil mixture over bread. Next add slices or grated cheese you have chosen to use.

Place bread onto a cast iron skillet and put pan under preheated broiler. Wait until cheese melts and is bubbling.

Use caution, watch bread as it is toasted. Toasting of bread and melting of cheese under broiler can happen fast. You don’t want a piece of burnt bread and cheese.

Once cheese has melted, remove from oven and sprinkle cheese toast with either chopped cilantro, diced chives, torn basil leaves, or chopped parsley.

You love the gooey delicious flavor of melted cheese? Then you’ll like these recipes as well.

That’s our Teriyaki Cheesesteak Sandwich. Th sandwich is made with thin slices of ribeye steak.

This sandwich will give you a smooth, buttery, and flavorful experience in your mouth and will end with happy bellies.

Birth Place and Popularity of The Cheesesteak Sandwich

Philadelphia (USA) is the birth place of the cheesesteak sandwich and is a popular regional fast food to this day.

The cheesesteak, well actually the steak sandwich was a creation of the 1930’s by a hotdog stand owner named Pat Olivieri.

The exact story behind its creation is debated. But the sandwich became so popular, that Pat opened a restaurant called – Pat’s King of Steaks – and is in operation till this day.

But wait, if Pat did not use cheese on his original creation, then why is it called a cheesesteak sandwich?

The media syndicate – Thrillest– writes that a manger at Pat’s named Joe Lorenzo, an overly confident manager, dropped a little Provolone to complete the masterpiece.

Later in 1952, Cheez Whiz hit the market. And since then, the Philly Cheesesteak and Cheez Whiz have become very close friends.

Variations of cheesesteaks are now common in many restaurants and fast food establishments.

Out side of Philadelphia, the original sandwich is referred to as a Pilly cheesesteak.

According to a media syndicate named – Mashed – Pat’s King of Steaks can turn out upwards of 6,000 cheesesteaks per day.

Thinly slice onion. Slice ribeye into thin strips (easier to do if meat is half frozen)

Then evenly spread the onion meat mixture across the tray in a single layer, with onions on bottom and meat on top.

Position tray about 5 inches away from the broiler and broil on high for about 10 minutes or until the beef is caramelized and the onions are softened. Be sure to check it every couple of minutes to prevent burning.

Remove the glass dish from the oven. Blanket the beef and onions with the 6 cheese slices and place the rolls cut side up in another glass dish.

Place under the broiler on low for about 2-3 minutes or until the cheese has fully melted and the bread is slightly toasted.

Plate cooked cheesesteak between to slices of toasted hoagie bread. Add your favorite side dish and enjoy. 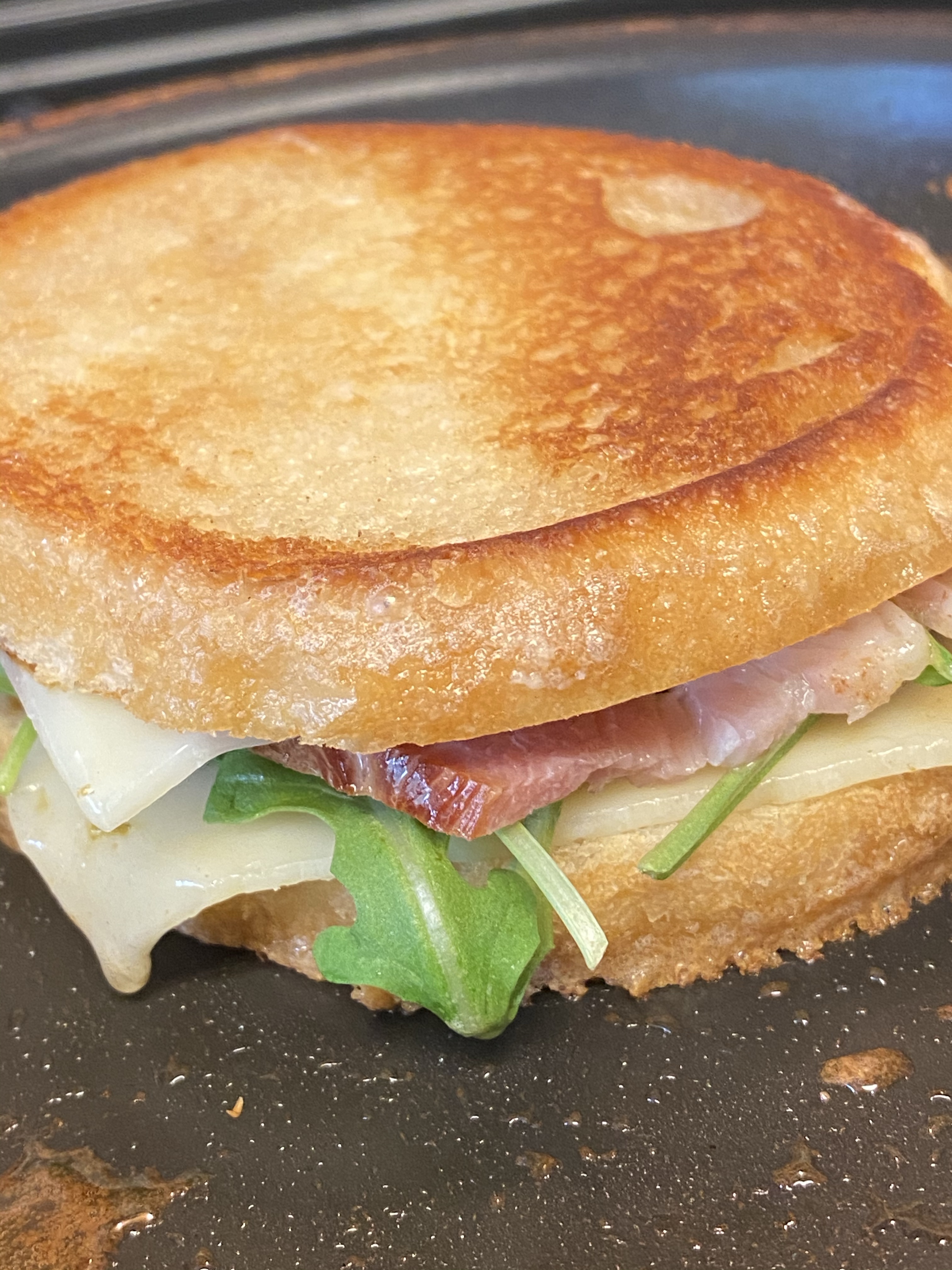 A sandwich is any dish wherein at least two slices of bread serve to contain or hold together other foods.

The sandwich comes in different shapes and sizes. Even a wrap is considered a true sandwich. 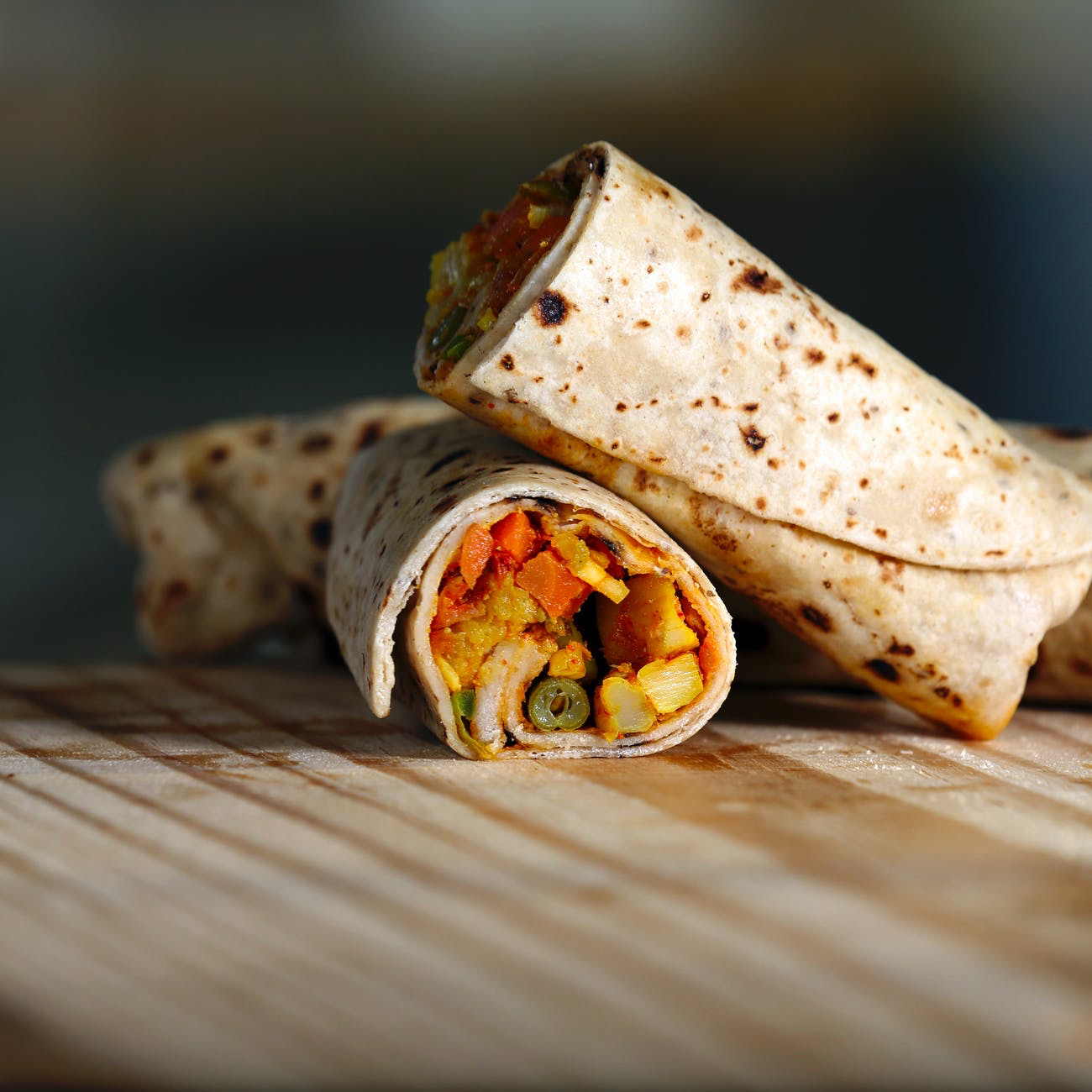 It is written that he would often asked for meat stuffed between two pieces of bread.

Even the Hawaiian Islands were called, The Sandwich Islands, as the Islands were also named after John Montagu, in 1778.

The first written record of the word “sandwich” appeared in the personal journal of Edward Gibbons (1737-1794) on November 24,1762. Gibbons was an English author, scholar, and historian.

In 1840 the sandwich made its way to the United States.

Englishwoman Elizabeth Leslie had a recipe for ham sandwiches in her cookbook, Directions for Cookery, in which she suggested it be used as a main dish.

What about the grilled cheese sandwich? This sandwich started out as a simple one with just three ingredients – bread, cheese and butter.

Nothing is known about the grilled cheese sandwich between ancient times and the 1920s.

It has come along ways though, as gourmet versions are popping up in residential kitchens and restaurants across the USA.

People are even exploring international varieties as well.

According to Food Time Line bread and cheese are ancient foods and were also included in Roman cookbooks.

Many cultures have their own way of preparing the dish.

In Switzerland it is customary to toast the bread and melt the cheese separately before combining them.

And in France the Croque Monsieur, a grilled ham and cheese sandwich, is popular.

The grilled cheese is one of the most popular comfort foods in the world.

What constitutes a gourmet sandwich?

Well when you think of the word gourmet, it refers to an elaborate preparation of the food you are preparing.

In the case of a grilled cheese sandwich, that would mean simply more than just white bread, American cheese and butter.

Why not switch the white bread for pumpernickel, rye, sourdough, or any of the whole grain breads. Make sure it’s not too thick and doesn’t have too many large holes.

Get rid of the processed American cheese and try Swiss, Gouda, brie, mozzarella, pepper jack, Havarti, and sharp cheddar, among many other cheesy choices.

Try different spreads on the bread.
Such as honey mustard, chipotle mayonnaise, cranberry relish, pesto, buffalo wing sauce, among others.

Sky is the limit when it comes to adding meat. 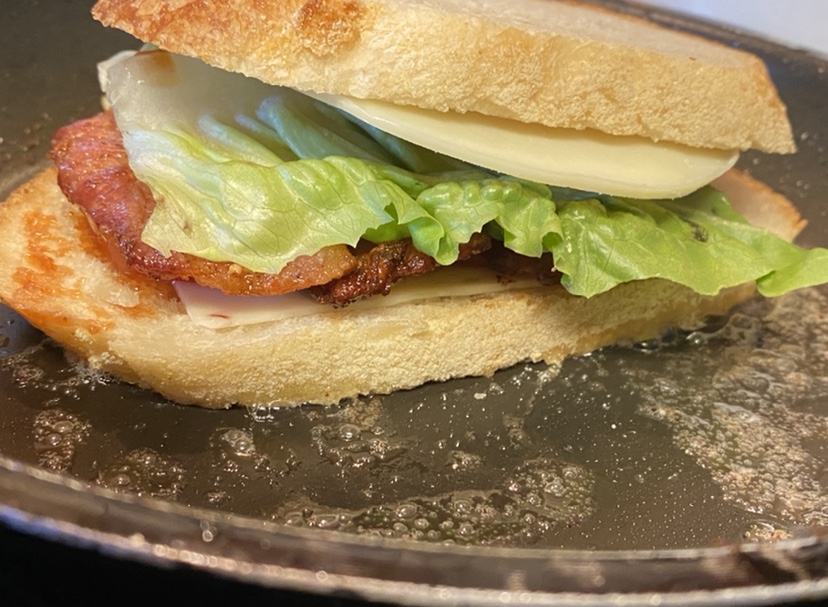 Grilled Cheese On Sourdough with Bacon and Leafy Greens

There are so many ways that you can spruce up your grilled cheese. 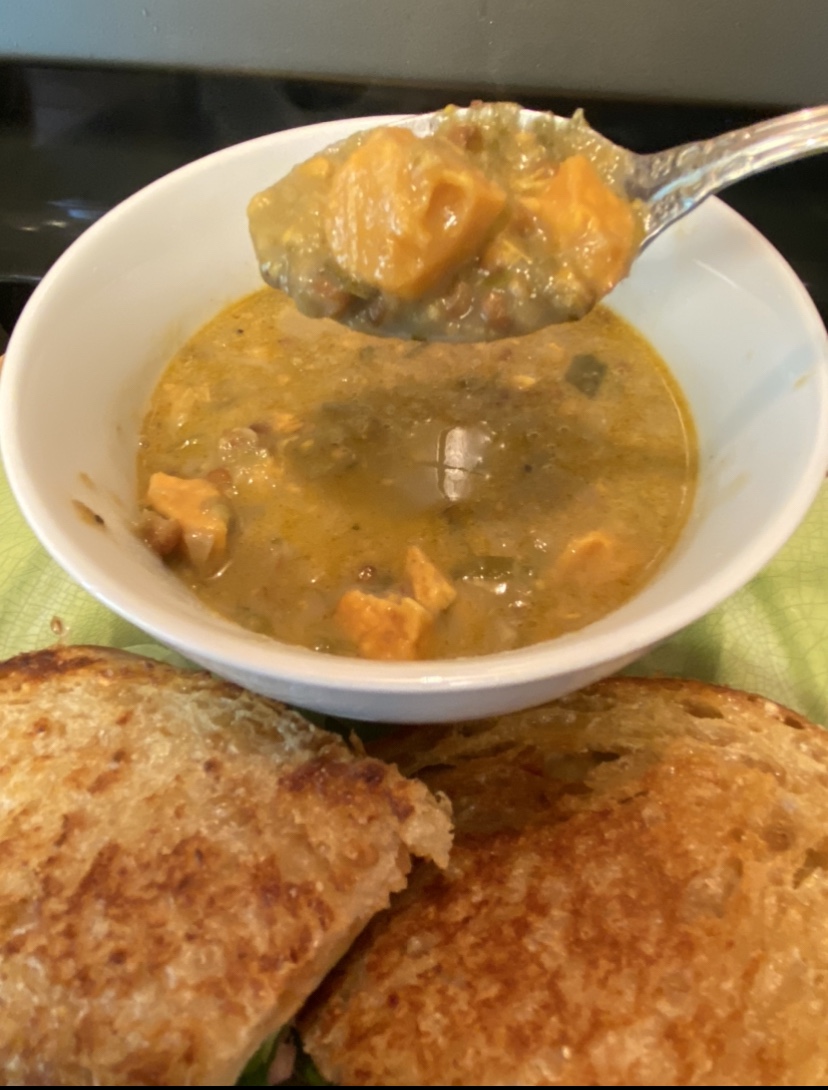 Sweet Potato and Lentil Soup with a Grilled Cheese Sandwich

You can even pair it up with different soups besides the traditional tomato.

Why not try some of the following soups to pair with your sandwich. Such as: 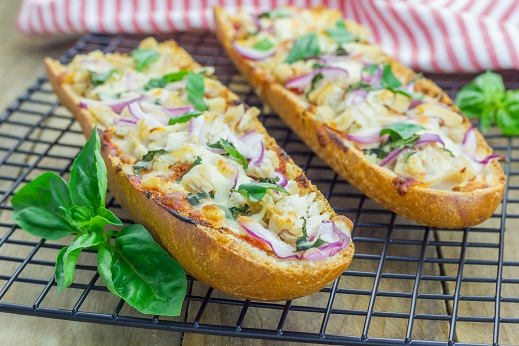 Rotisserie chicken sold at Costco and other markets for $4.99 is a great deal. They say that they are actually losing money by doing that, but it gets you in the warehouse or store to by commodities, like food, clothing and other products that they sell. So their loss is made up in the other things that you buy. 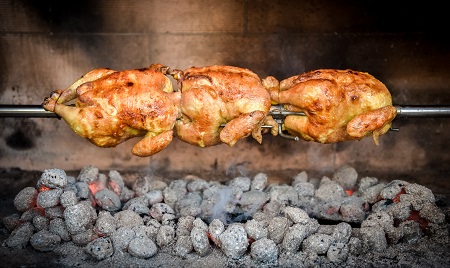 Most are familiar with what a rotisserie chicken is.

For those who are not familiar, the chicken is skewered on a spit or a long solid rod while it is being cooked over an open fire, such as in a fireplace or over a campfire, or roasted in a rotisserie oven.

The rotation of the chicken on the spit cooks the meat evenly in its own juices and allows easy access for continuous self-basting.

Rotisserie cooking was popular in medieval times and in early modern kitchens that had a fire place. 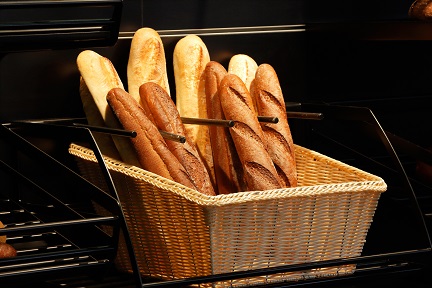 The loaf of baguette that we used is a long thin loaf of French bread.

The history of the baguette according to Wikipedia is that the word “baguette” was not used to refer to a type of bread until the 1920’s, but what we know as a baguette today, may have existed well before then.

The word is derived from the Italian bacchetta which simply means “wand” or “baton.”

Our featured recipe is a delicious meal that can be ready in 20 minutes from start to finish.

Cut baguette loaf in half lengthwise.

Pour 1 cup each of BBQ sauce on top of both halves of bread.

Next, place 1 cup of shredded rotisserie chicken onto each baguette half.

Evenly sprinkle 1 cup of mozzarella cheese onto each of the baguette halves.

Evenly sprinkle chopped onion over the cheese between the two baguette halves.

Place the two baguette halves on a cookie sheet and bake for 15 minutes or until cheese has melted and bread is heated through.

Sprinkle some torn basil leaves over the tops of both baguette halves. Note: do not tear basil leaves until you are ready to place them over the prepared cooked sandwich.