Tilapia are mainly freshwater fish found in shallow streams, ponds, rivers and lakes. Tilapia were one of the three main types of fish caught in Biblical times from the Sea of Galilee.

Tilapia have very low levels of mercury,as they are fast-growing, lean and short-lived, with a primarily vegetarian diet, so do not accumulate mercury found in prey. Tilapia are low in saturated fat, calories, carbohydrates and sodium, and are a good protein source. They also contain vitamin B-12 and trace minerals such as phosphorus, niacin, selenium, and potassium.

Black pepper adds more than just flavor, it is also good for digestion. Spinach is a cruciferous vegetable, and 4 servings a week of this class of vegetable helps ward off cancer causing cells.

As a side note, this recipe is great nutritional support for those who suffer with Schizophrenia (Read More Here: Nutritional Hope for Schizophrenic Patients).

Here is what you will need for our featured recipe:

Cut lengthwise pocket down 1 side of each cut Tilapia, being careful not to cut through. Pack 1/3 cup spinach mixture into each pocket. Sprinkle with salt and pepper.

Bake in heated oven for 12 to 15 minutes or until done. Plate and serve with your favorite side dish, such as we have here with a Bacon Cornbread or Baked Parmesan Potato.

Source of information about Tilapia: Wikipedia, The Free Encyclopedia 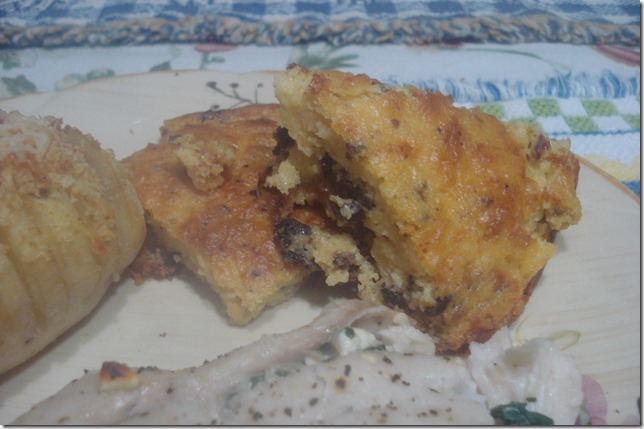 Combine cornmeal and 1 ¼ cup milk in medium saucepan. Stir mixture over medium heat for 5 minutes until it thickens and dries; spoon the mixture into a large bowl.

Add ¼ cup milk and the remaining 6 ingredients. Mix until smooth. Grease a baking pan (8-in. x 8-in.) and pour in the cornmeal mixture.

Bake in heated oven for 45 minutes or until a wood pick comes out clean from center. Let set and cool for 10 to 15 minutes. Cut into 9 inch squares.

For information about how food correlates to a healthy you view: Savor the food and Your Health