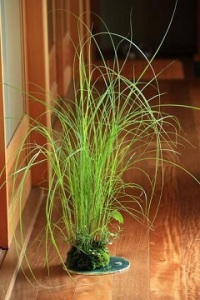 It is the practice of removing a plant with its roots from a planter or pot, then surrounding the roots with a mud cake, then wrapped with moss, and held together with string.

This type of planting works well with succulent plants, such as those that are placed in doors, as well as herbs, and other out door plants.

The Telegraph a newspaper distributed in the United Kingdom, says that the kokedama method of planting started in Japan, and skipped over to the Netherlands before finding its way to the United States, and since 2015 the method has found its way to England and into the hearts of plant lovers there.

There’s nothing new though about hanging garden’s. King Nebuchadnezzar of ancient Babylon indulged his queen with what is now one of the Seven Wonders of the World, the hanging gardens of Babylon, built around 600 B.C.

Marisa Lopez of Saving My Culture, says that kokedamas are elegant, and can be placed in any environment or in your garden.

This technique provides a simpler alternative to the bonsai, and is easy to grow – even for people who do not have much time to take care of plants.

Would you like to learn how to make your own Japanese kokedama to hang out in your garden from your trees or other support?

Lowe’s has a 40 second video demonstrating the ease of making kokedamas for inside your house or out in your garden.