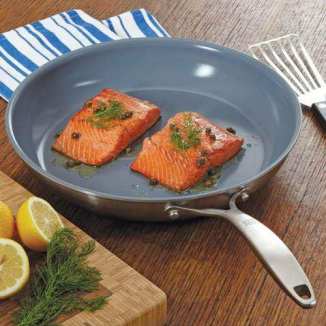 This is a posted article at our web-site Savor the Food and Your health .

Non stick ceramic cookware uses a non-stick technology that is a healthier choice over traditional petroleum-based non-stick surfaces. The Ceramic coating is applied at a lower temperature than conventional non-sticks and is free of polytetrafluoroethylene (PTFE), commonly known as Teflon, and perfluorooctanoic acid (PFOA), which is used in the manufacture of Teflon and other non-stick surfaces.

​
Teflon Cookware is Safe, Experts Say
​
–Teflon has the petroleum-based polytetrafluoroethylene and perfluorooctanoic acid, but yet the manufacture stands by their product as safe to cook with.–
​
According to DuPont, the finished product of Teflon does not contain any of the production-process chemicals linked to health problems in factory workers. And the U.S. Environmental Protection Agency says that ingesting small particles of Teflon flaked off into food is not known to cause any health maladies.
​
Even so, would you want something in your food that you did not intend for or was not an ingredient in your recipe?
​
They go on to say: With proper use and care, such pots and pan—which constitute more than half of all cookware sales in the U.S.—should be safe to use for years to come.
​
I don’t know how you feel, but should be safe…has a different meaning than is safe to use. Should be safe leaves a question mark.
​
In 2004, DuPont agreed to pay up to $343 million to settle a lawsuit alleging that PFOA, used in the manufacture of Teflon at a certain plant, had contaminated drinking water nearby.
​
In 2006, pots and pans with this special coating (Teflon is the best-known version) constituted 90 percent of all aluminum cookware sold, according to industry numbers. Yet despite nonstick advantages (its surface makes cleanup easy and also allows cooks to use less oil and butter), it has come under fire in recent years over concerns about toxic chemical emissions
​
The EPA has reached an agreement with eight companies, including DuPont, to phase out the use of PFOA completely by 2015.
​
The Good Housekeeping Research Institute put three pieces of non stick cookware to the test: a cheap, lightweight pan (weighing just 1 lb., 3 oz.); a mid-weight pan (2 lbs., 1 oz.); and a high-end, heavier pan (2 lbs., 9 oz.). They cooked five dishes at different temperatures on a burner that’s typical in most homes. The results: Even they were surprised by how quickly some of the pans got way too hot.
​
This statement: different temperatures on a burner that’s typical in most homes. What is typical in most homes? When I was growing up a gas range was what my mother used. But when I got married and bought my first home, we had an electoral range oven. I found gas heats faster than electoral ranges. Is that your opinion?
​
At 680 degrees Fahrenheit, Teflon releases at least six toxic gases, including two carcinogens, according to a study by the Environmental Working Group, a nonprofit watchdog organization.
​
Maybe you won’t cook your stove top food that high. But did you know at the moment you pass your food from pan to plate, the pan is hotter than the food? If your frying chicken and you have done so to an internal temperature of 165 degrees (the chicken meat) the pan is from 100 to 250 degrees hotter. I don’t know if I would want a pan that as the ability to kill me with a toxic gas.
​
Most non stick manufacturers, including DuPont, now advise consumers not to go above medium. (DuPont maintains, however, that Teflon does not pose any health risks, and that its guideline is simply meant to maximize the life of the product.)
​
But how hot is medium? Since the range top gas or electric is not calibrated like your oven, every stove that you set at medium will be different degrees.
​
So for now it seems that non stick ceramic cookware is the better choice for healthy cooking. Keep in mind that non stick ceramic cookware was used years, many years ago for cooking before stainless steel or these petroleum based non-stick pans came along.